“Since last ten years, after passed away my husband by Tiger biting I was engaging in daily labourers and earning money to maintain my regular expenses and built up my three daughters. Later I had given marriage to all my three daughters and still I was continuing my unskilled jobs in local Agriculture sectors.

After long time lock down and later facing cyclone Amphan disaster Anita devi really fallen in trouble. She enrolled her name with local Panchayat for getting free ration support, but it was not materialized. Like many other poor family, this family also facing acute food insecurity in this post disaster period.

After received dry ration kits from us, Anita devi fill with tears of love. She bow wholeheartedly thanks to our field staff as well as Tiger Widows Organization for taking such noble initiative in this most critical part of human life.

Case study: ‘I will never forget relief support from Tiger Widows Organization in my life------Parul Mondal” 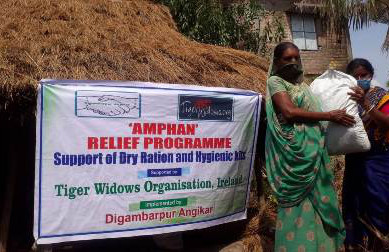 “I had lost my husband, Monoranjan Mandal four years back. One fine morning I came to know that he will never came back from the river as the local Police informed me that he has dies due to tiger biting--- from that day I am struggling with my two kids. I was managing my family through a petty business in my own village. But initially the lock down due to COVID-19 and later the cyclone Amphan totally damages my business, my small kachha house as well as my confidence and fate----- How I will survive with my two kids. I have received the dry ration kits from Tiger Widows Organization & Digambarpur Anbgukar--- thanks to them for support me in this most tuff situation, But I need to survive to earn money through any skill development initiative ” ---Parul Mondal, Village & PO: Kumirmari, Sundarban Costal Police Station, South 24 Parganas District, West Bengal.

Case study: ‘I had lost everything----- the cyclone left me with nothing---- Tiger widows Organization extent their relief support on time------Sadhana Das” 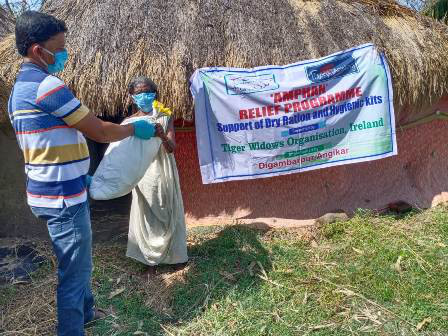 “During cyclone Amphan ,the river embankments broke and saline water entered our village. Me along with other five members in my family manage to cross the water and reached a primary school .I stayed there for four days and when we came back, we saw our Mud making house was completely washed away. At present with support from local Panchayat I made a temporary house using bamboo and plastic sheeting---- This cyclone left me with nothing. Thanks to Tiger Widows Organization and Digambarpur Angikar for giving me this relief kits—all these commodities will help to me and my family for time being”—Sadhana Das, Wife of Later Dulal Das---Village +PO: Purba Sripati Nagar, Ptharpratima Block, South 24 Parganas. 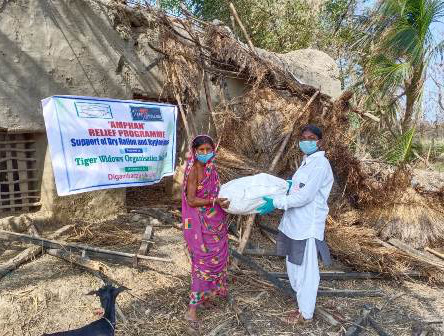 Samir Sardr, one of the adult members in the family, a tripical category unskilled migrant labour engaged in construction works. Since last four years he was in Kerala. Due to lock down he was manage to return back to his home land. Generally he spends outside of his family, nine to ten months in a year and return back to his home land for the rest two to three months. Here his wife and one kid are staying in the family.

The family had only a kackka bamboo made house and nothing else even a single kathha of cultivated land. Only source of income is Samir Babu’s monthly wages and irregular income from fishing. Initially during lock down period all of them were locked inside the house. Samir was forced to leave his workplace in Tamil Nadu on March 20. Samir left in such a hurry that he could not even take his salary from his employer who promised to electronically transfer it or send it through India Post (money order). But to date, Samir has not got any rupee. And lastly this Amphan Cyclone destroyed everything of the family. Durga devi was also very scared in these troublesome days. After received Dry Ration food packet from Tiger Widows Organization and Digambarpur Angikgar, Durga Devi and her entire family feels relax for the time being, as for few days they could manage their daily ration and could provide food for the little kids as well as other family members.